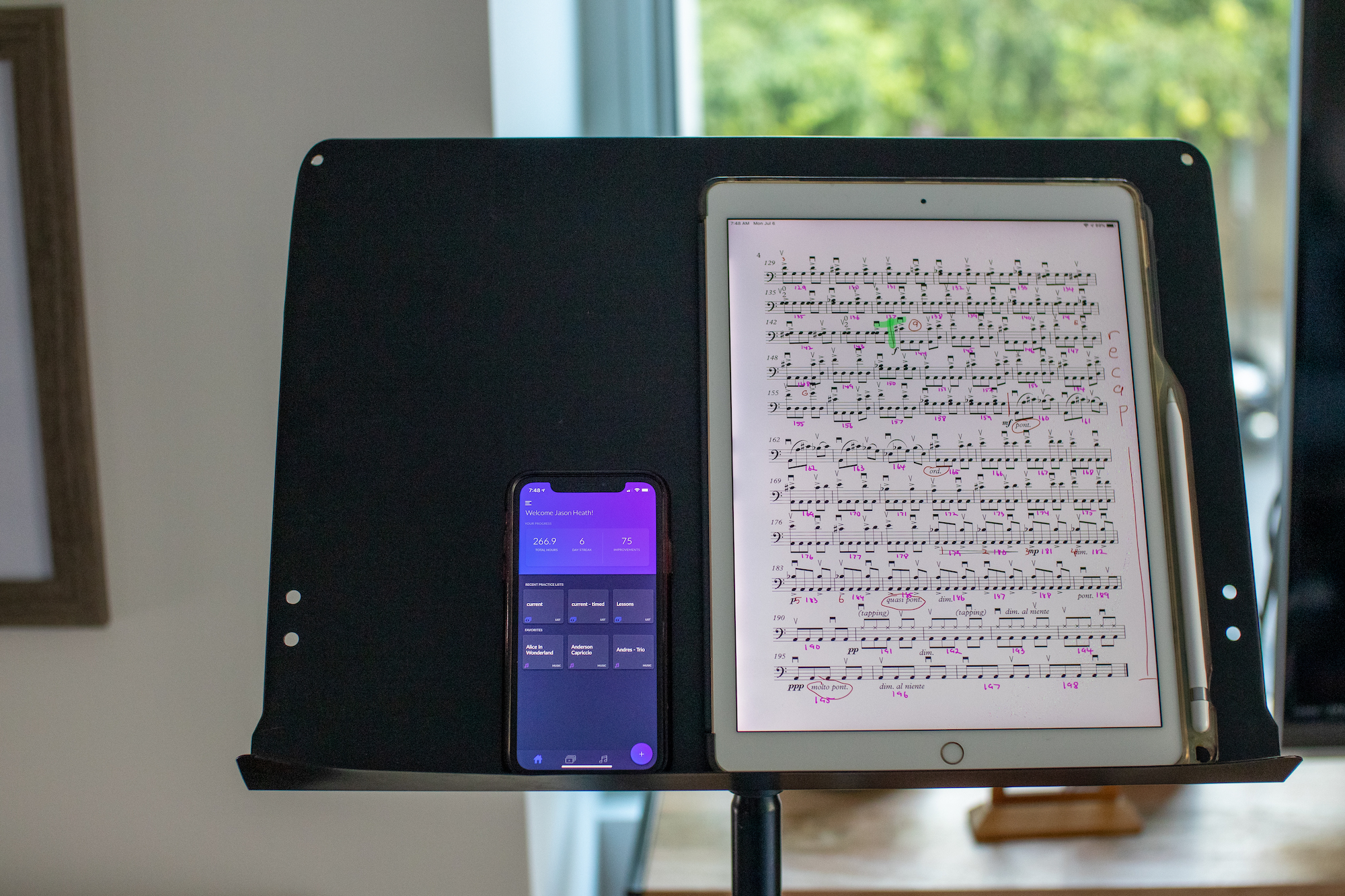 Two tools for sharpening your practice

A few years ago, I wrote a guest blog post for Audition Cafe about a practice journal system that actually works.

This system, developed by MET Orchestra percussionist and auditionhacker founder Rob Knopper, treats each excerpt like a portfolio.  Rob would keep all recordings, notes, and such in one folder, so that when the piece came around again, he’d have his body of research handy for him to cross-reference.

Learning about Rob’s system inspired me to find a way to make it work with Evernote, which has been my “digital brain” and project management tool of choice for over a decade.

Since that blog post came out, I’ve been refining my system, and I’ve gone all in on two apps that have totally changed the way I keep track of my music, recordings, and notes.

At the end of 2017, I finally scraped together enough cash to pick up an 11 inch iPad Pro and an Apple Pencil.  I’d been eyeing my colleagues who had jumped on the digital sheet music bandwagon, and after a long chat with a gigging harpist who swore by the combo, I took that plunge and shelled out a disturbingly large amount of money for the tablet and pencil.

Getting the iPad Pro totally transformed the way I thought about sheet music.  Going to music school in the ’90s, I’d grown to love the physicality of pulling out my music, getting a whiff of that musty paper and glue, cracking open the spine, and looking at the crazy patina of old pencil markings.

I was worried about the sterility of looking at my music on the iPad.  What about the sensory experience of the paper? What if something went wrong, like if I forgot to charge the iPad, or (gasp!) dropped it?

Those potential downsides have been massively overshadowed by the very real upsides of being able to have my entire music library in one place and available to me with just a few clicks.

Finally getting into forScore

I had been aware of forScore for quite some time.  In fact, it was one of my early app purchases when I bought the very first iPad back on April 3rd, 2010.  That’s the day it was released, by the way, and yes, I’m that kind of Apple nerd!

I played around with forScore for a while back in the early days of the app, but it never really “clicked” for me.  Notating on the music was a cool option, tt just didn’t seem that much more convenient than doing everything in a more general-purpose app like Goodreader.

Getting the bigger-screen iPad Pro in 2017 and having the added utility of the Apple Pencil inspired me to take a closer look at forScore, and boy, am I glad that I did!  This app has come a long way in terms of its feature set, and I found myself spending hours obsessively experimenting with its many features.

I realized that forScore made Rob Knopper’s “portfolio practice journal” approach so much more practical for me.  With forScore, every piece functions like a folder, with notes, recordings, tags, and such following it around regardless of setlist.

After interviewing the wonderful bassist Lauren Pierce about her course on practicing, I got an email from a representative from a company called Modacity.  This startup had created a practicing app focused on deliberate practice.

After a little sleuthing, I realized that the Modacity team was based out of San Francisco just a few blocks south of me.  I met up with them and did a podcast interview with CEO and founder Marc Gelfo.

I also started to use the app for my own practicing, mainly for research purposes.  I wasn’t really looking for a new app for my practicing, but the features and layout of Modacity intrigued me, and I found myself using it more and more. It soon dawned on me that I was practicing much better when using Modacity.

With his background in both cognitive science and music performance, Marc had created an app tailor-made for focusing on what actually needs to be practiced and measuring results.

After playing around with a few options, I came up with the following system for using both of these apps.  There are certainly many other ways in which these apps could be combined, but this is what has worked the best for me.

1 – I build identical lists in both apps.

Generally, I just use one list and slowly add and subtract items over time.

Here is my current list in both apps to give you an idea of how granularly I break things down.  If I were planning for an audition, I would probably have each excerpt be its own item (Mozart 35 mvt 1, Ein Heldenleben #9, etc):

I find that planning this out ahead of my practice schedule keeps me on track in the moment.  Pieces come and go from this list according to gigs (or the pandemic-induced lack thereof), but the general flow of technique into repertoire remains the same.

Separating out the planning from the practicing has been huge for my focus. Even if I only have 20 minutes, I’m now much more likely to pick up my instrument and get something done because I know that I can open up my apps and dive in.

2 – forScore is for marking, Modacity is for tools and tracking

I keep my iPhone with Modacity on the left of my music stand and my iPad with forScore on the right.  I’m left-handed, so I don’t know if it would be more comfortable reversed for right-handed people.

While it is possible to use both Modacity and forScore in split-screen mode on the iPad, I find that separate devices work much better for me.

I find myself interacting with Modacity much more frequently during a practice session than I do with forScore.  Modacity is my practice timer.  It reminds me to take breaks.  It’s my drone and metronome.  I use it to record myself, and I use the “improve” button to really hone in on what In need to be practicing and not waste endless amounts of time playing what I can already do well.

I use forScore like I would use paper music, but I mark up my music much more than I would on paper. I use different colors to indicate things like practice chunks, goal tempos, fingerings and bowings, and notes to myself.  Since I can show and hide multiple layers for each page in forScore, there’s no danger of over-marking my music.  I can turn off various layers to get a clean part at any point.

I also find myself zooming in on the iPad to the exact section on which I’m working.  That helps me to really focus on the passage at hand and resist the urge to simply barrel through things.  I’m so accustomed to this that I now  find myself trying to “zoom in” with my fingers when using paper music!

I record myself in Modacity multiple times during a practice session, but most of the time it’s to simply listen back to a few bars.  Getting in the habit of this helps to separate performance from evaluation, which is so helpful in developing solid performance skills.  I typically don’t save any of these short recordings.

Every few days, though, I intentionally save the recordings for later evaluation.  Depending on where I am in the learning process, that recording might only be a short section, or it could be an entire run of a work.  This listening back and evaluation process is another time in which forScore and Modacity interlock together so perfectly.

At the end of my practice session, I’ll sit down with both forScore and Modacity.  With Apple Pencil in hand, I’ll play back the recording in Modacity and mark anything in the music that I want to work on.

I’ll then use the “notes” section of that piece in Modacity to create to-do items like:

Those notes become a checklist in the app, so the next time I open up the piece in Modacity, I’ll see a neat and tidy to-do list of what I actually need to practice. What a brilliant implementation!

There’s a lot more I could say about both of these apps. Both of them have really taken my organization up a notch, and they’ve made my practice sessions much more efficient and targeted.

What tools do you use in your practicing? If you use these apps, do you implement them like I’m doing, or do you have a different method? I’d love to know!

Jason Heath is the host of Contrabass Conversations, a podcast devoted to exploring music and ideas associated with the double bass. His blog and podcast are highly regarded in the music world and have been featured as top offerings in the world of arts and culture for the past decade.

An active double bass performer and teacher, Jason taught double bass at DePaul University for seven years and served on the Board of Directors of the International Society of Bassists for many years. He also previously taught at the University of Wisconsin-Whitewater and at Trinity International University. Jason previously served as President of the Illinois chapter of the American String Teachers Association and as the Illinois Music Educators Association District 7 Orchestra Division Co-Representative.

A graduate of Northwestern University, Jason currently performs with the IRIS Orchestra in Memphis Tennessee, and with he Midsummer’s Music Festival in Door County, Wisconsin. He was a member of the Elgin Symphony for 16 seasons and has performed with the Lyric Opera of Chicago, Grant Park Symphony, and numerous other professional ensembles.