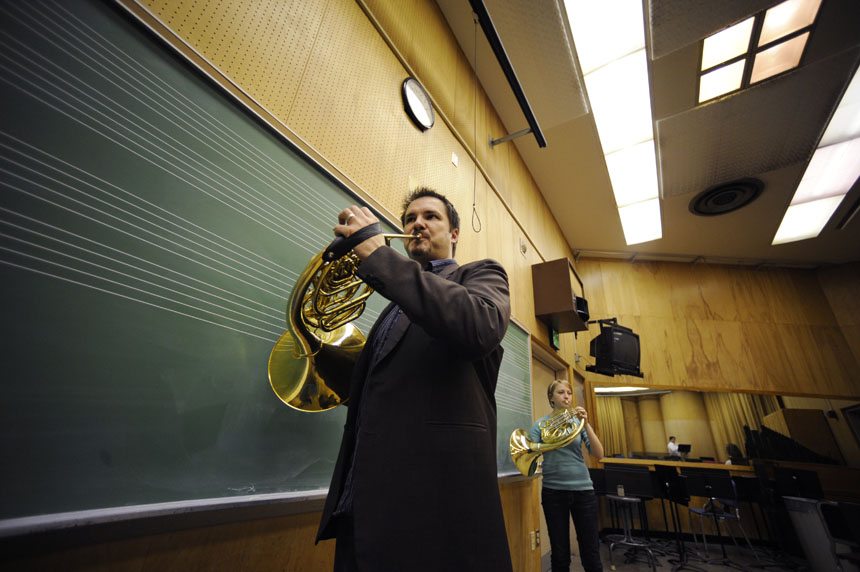 Make the Decision Easy For Them

How many audition finalists who don’t end up winning the audition could actually do a good job in the position?

Answer: It doesn’t matter.  You just have to win the audition.

How often does that one mistake cost you the audition win?

Answer: Pretty much never. If you played incrrrrrrredibly well for every other note, and then made that one mistake, it would not have mattered.

Make the decision easy for the panel. It’s that simple…and that tough.

To win an audition, you have to convince the panel, through your performance, that you are the optimal choice. You have to make it an easy decision for the majority of the panel to agree to hire YOU over the other candidates. In some cases, more than one performer is hirable — it is especially pivotal in these scenarios to make the decision easy. It isn’t a foregone conclusion that someone will emerge from the final round of an audition with a job offer. Often, when the choice isn’t clear to the panel, they discuss…and discuss…and discuss their options, until they reach an impasse — then, they send out another audition announcement, the following spring.

Let’s be realistic: most finalists reach the finals of the audition process because they sound quite capable of doing the job for which they’re vying. In the earlier rounds, they met or exceeded the technical requirements of agreeable execution — they sound like they know the score, and they play accurately, with dynamic contrasts, and with good time, intonation, and sound in all ranges. Winning an audition, though, requires you to surpass good-enough — in order to win an audition, you have to be great.

Good-enough is the enemy of great. A good-enough performance is…good enough to advance you past the first round. After that, all bets are off. You have to be great. Great performances, performances that make the decision easy, reach beyond the panel’s intellect and affect them emotionally. To do this, you have to share your musical stories in a way that contributes more to the listener than proof of your fitness as a candidate or your ability to accurately play the ink on the page. That extra oomph reaches the panel in multiple, often inexplicable ways. These ways appear through the personal decisions you make as a performer — rubato, dynamic and color contrasts, an elegant lift right before a certain note, a magical ending to a phrase, in which it’s unclear where your spinning, sparkling sound turns into breath-stopping silence.

To get from good-enough to great, you have to be mindful of both your attitude and your approach. Yes it is possible a performer could win an audition even if they don’t make the decision easy for the panel, but you can’t coast on that. It’s safe to assume that the audition-winningest musicians approach their preparation aiming higher than, “I just need to be the best of the bunch.” You have to hear the mind-blowing versions in your mind’s ear. Then you practice in ways that have you making your excerpts sound the best you can imagine on your first (and only) performance. It’s not just about your technique; it’s about your approach to musical and personal greatness. You don’t win an audition because you managed not to make more than three mistakes per excerpt. Yes, you could smudge past in a close call, but those narrow odds aren’t reason enough to hop a plane to an audition. Be great, and train to be great — it makes your decision to click “purchase ticket” easy…and worth it, because you’re more likely to get a return on your investment that starts with an incredible feeling on your return flight!  Trust me, you want that INCREDIBLY exciting and fulfilling feeling of flying home from an audition having won it.

As you prepare for an audition, you have to ask yourself, “What’s it going to be — reasons, or results?” To get to great, the answer has to be results. While reading Wayne Dyer’s book, You’ll See It When You Believe It, I had a lightbulb moment of strong clarity when I saw this phrase:

This idea can help us to let go of destructive emotional attachment to what is coming out of our instruments, and help us to be present and realistic about what we’re actually doing. Don’t let minor flubs distract you from your end goal — when you let a missed note determine your mood or how you feel about yourself (or your instrument), you waste valuable prep time and focus.  Destructive critique in performance is even more destructive.

So, how do you increase your positive results? Mix up your training! This isn’t a new idea. What also isn’t new is which of the three aspects of performance — the technician, the musician, the person —performers most often neglect. Sadly, it is also the most important.

As you know, the winning audition performance is above the requirements line in technical abilities and musical knowledge.  The third aspect to audition performance is the person performing.  Who you as a person? So many factors at play here in regards to focus, ego, reverence to story, calm recovery, eagerness to be heard…to be understood. This is the biggest variable of the three aspects.  Once you’re above the requirements in technique and music, it’s all about your personal choices in preparation and performance that evolve the intangibles.

Why are you onstage?

The person drives the musician and the technician

Keep mixing up your ways you learn about the person you are so you can consistently prepare and perform the best possible versions of your music.  Here are some of my ways, and people from whom I get more ideas:

Read about performance and the mental game.

Check out the performance experts

Listen to Podcasts by experts on the mental game

Collect inspirational and motivational quotes.  Surround yourself by them.  Change them up often! Keep ‘em fresh!

I love quotes, as they take me somewhere constructive quickly…and energize me.  Motivate my quantity of work, and inspire my quality of work.

Play for people who don’t play your instrument.  They are incredible unsympathetic ears that will look for simplicity of message, and let you know when you’ve complicated it.

Record yourself.   It’s your most objective data, as long as you listen with un-forgiving ears.  Don’t give yourself the benefit of the doubt while listening back. Hear it like an objective idiot, and if it didn’t blow your mind, get surgically detailed about what was distracting to the simple line, and creatively aggressive in finding solutions. Mark your solutions in your part.  There’s your work for the next practice session.

On that note, here are two final ideas for you.

One – If you’re wondering whether to do that next audition, Seth Godin writes a wise blog.  One day he wrote to the audition/don’t audition question quite well:

“MISSED IT BY THAT MUCH”

Here’s an interesting choice that most people leave unmade:

How comfortable are you engaging in projects where there’s a likelihood that you’ll lose by just a hair?

What makes a project worthwhile and interesting is that it might not work. All the this-is-sure-to-work projects are taken.

Given that you’re taking a risk, what kind are you up for?

Are you seeking out areas where there’s no competition, true longshots where few people see you fail?

Or are you okay with the daring near misses?

Two – Now that you’ve committed, make your training be that of someone who will not lose by just a hair.  Train in every way possible to make the decision easy for them.

Remember, they want to hire someone.

Jeff Nelsen is one of the many Canadian magician horn-performing professors in the world who was raised on a pig-farm with opera-singer parents. He’s writing here on auditioncafe.com because he’s won auditions both before and after he became unable to start notes in performance. He’s had mental and physical roadblocks, and he not only stayed on the road, he’s thrived on it. Jeff says, “It’s hard to teach something you haven’t had to learn.”

Probably best known for the eight years he spent touring and recording with Canadian Brass, Jeff has also performed concerti with orchestras on six continents, and in the horn sections of dozens of orchestras including the New York and Los Angeles Philharmonics, and the Boston, Chicago, Cincinnati, Montreal, Porto, St. Louis and Vancouver Symphonies. This year’s performances include South Africa, Santa Barbara, Brazil, Germany, San Diego, Seoul, Ottawa, and in home-town Bloomington Indiana. Jeff most enjoys performing with his wife, mezzo-soprano Nina Yoshida Nelsen, on recital series and in their two orchestral pops shows.

Jeff is especially proud of becoming professor of horn at the illustrious Indiana University Jacobs School of Music without having finishing his studies at McGill University in Montreal. At last calculation, he is in his 28th year of his bachelor degree in horn performance. His curious pig-farmer international horn soloist life-path brought him to become founder of Fearless Performance LLC, a company that focuses on training people of all walks of life to transcend their limited self-worth illusions, and discover how to consistently perform their absolute best in order to reach their own “unreasonable” goals. Since giving his celebrated 2011 TEDx Talk about Fearless Performance, Jeff has been training fellow TED Talkers, teachers, athletes, and business people into giving their own Fearless Performances as well.

Aside from creating musical magic, Jeff is an enthusiastic magician, and often adds touches of illusionary arts to performances. He recently reached a childhood dream of becoming a magician member of the Academy of Magical Arts at the world famous Magic Castle in Los Angeles. Go to www.jeffnelsen.com to contact Jeff and to sign up for his free “Fearless Performance” newsletter.